A Late Diagnosis that Led to Powerful Advocacy 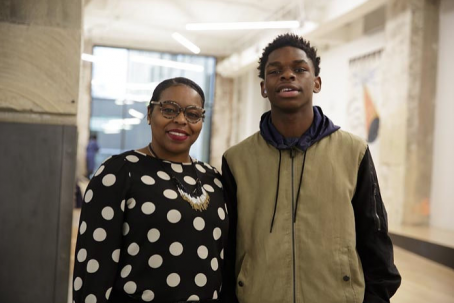 At one and a half years of age, Desean started to lose his hearing, but the diagnosis that he had hearing loss did not come until he was almost five. During this time, he made up his own language to communicate with his family. Because he was not diagnosed until later, he also lost out on tremendously important early intervention services that would have benefitted Desean as he began to move into his early school years. Tequilla, his mother, learned American Sign Language (ASL) through volunteering at Desean’s school, which in turn motivated her to go into healthcare leadership.

Tequilla noticed a lack of resources when she learned of her son’s hearing loss. She describes her journey towards finding information as a continuous learning process.

“I took it upon myself to become an advocate for my son and others. It would be so helpful for people to know about programs and resources in their communities,” said Tequilla.

Today, Desean is a senior in high school and is excited for college. He is preparing to go into auto mechanics.

“I’m so excited and terrified at the same time for him to go out on his own. I’m excited for him to graduate and get his diploma, and I also can’t wait to see how he will grow in college. Yet, I’m worried that people won’t understand him or won’t want to communicate with him,” said Tequilla.

During his time in school, Desean has not had the resources and tools he needed to fully succeed at school. His Individualized Education Plan (IEP) allows for Desean to use note takers when he needs them, as well as interpreters. However, his IEP has not always been fully implemented.

“We’ve had to fight for every single thing.”

Tequilla, his mother, learned American Sign Language (ASL) through volunteering at Desean’s school, which in turn motivated her to go into healthcare leadership. She sees a few solutions to helping educators understand the different needs of students.

“All educators should be required to take a disability training class to know how to best serve the needs of their students. Also, schools need to teach ASL so that our children’s peers are better able to communicate with each other and their teachers.”

Currently, Tequilla is using her experiences to teach parents and other children about resources that are available for individuals who are deaf or hard of hearing. She is also passionate about spreading awareness about disabilities.

Tequilla continues to advocate for people with disabilities every day in Memphis, Tennessee. Most recently, she helped 20 deaf and hard of hearing high school students land paid internships through the City of Memphis.