Advocating for a Tennessee Where Her Daughter Can Thrive 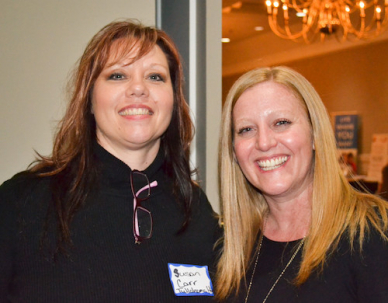 When her daughter, Lexi, was nine months old, Susan Carr dropped her off at the daycare center before going to work at her office. Later in the afternoon, Susan received a call that would transform her into a fierce self-advocate on behalf of children and adults with disabilities.

In 2000, Cri Du Chat syndrome, also known as 5p- Syndrome, was a rare genetic disorder that still had not been widely researched. With a chromosome deletion on chromosome 5, this caused doctors to believe the effects of this syndrome to be severely limiting.

Lexi’s doctor decided to give her a genetics test to determine if the small size of her head was simply a growth issue or if it was an indicator of the rare Cri Du Chat Syndrome. A few weeks later, Susan took the phone call that confirmed her daughter’s diagnosis.

“The geneticist simply told me that Lexi would never walk, talk, or tie her shoes. She said she would never be ‘college material’ and that I should consider putting her somewhere that could take care of her daily needs so I could move on with my life,” said Susan.

“When I went to pick up Lexi from the daycare that afternoon, I felt like I was picking up a different child. Then, I remembered that Lexi was still Lexi. She was still my daughter I had hugged goodbye that morning, with or without the syndrome.”

Susan called her mother to talk about Lexi’s genetic test results, “My mom was a sturdy, sound voice of reason. If Lexi wouldn’t be able to talk, then I would just teach her American Sign Language (ASL). If she couldn’t walk, then she would use a wheelchair. If she couldn’t tie her shoes, we would just buy her Velcro shoes. She would still be able to do lots of things, just in different ways.”

Lexi was two years old when she took her first steps and started making sentences when she was four years old.

From there, Susan began sifting through different research, resources and educational options and services. She attended a self-advocacy training program called Partners in Policymaking. Through this training, Susan learned how to prepare three-minute stories to share with her legislators that would effectively impact them. The program also covered grassroots advocacy and issues spanning from housing and unemployment to community involvement.

“From my own experience, and from going through the different systems as a parent of a child with a disability, I discovered more about the lack of educational resources for students with disabilities, lack of expectations for these students and the segregation of classrooms. These were issues I was not okay with.”

After learning more and experiencing these issues firsthand, Susan decided to move into being a special education teacher.

“I knew it could be better. Special education is a service, not a place. Integrating classrooms should be a norm and not the exception. Providing kids with tools to graduate alongside their peers is extremely important. I know this because Lexi is not her disability; it’s a small part of who she is and she deserves the same educational and social opportunities as everyone else.”

Lexi has been integrated into her classrooms and other activities, such as horseback riding and cheerleading, but it took a lot of breaking down walls and barriers, long hours in Individualized Education Program (IEP) meetings and working patiently with her peers and coaches to get there. Through these experiences, Susan has taught her daughter how to be a self-advocate.

“It’s her life. Her voice matters. These are issues that impact her now and that will impact her in the future.”

One issue that may affect Lexi as she graduates from her current transition program and looks for a job is transportation.

“We’ve accomplished a lot in terms of erasing stigma of incorporating adults with disabilities into the workforce, but none of it matters if these employees can’t get to their jobs.”

Susan and Lexi were part of a group from Tullahoma High School who met with their legislators at Disability Day on the Hill in February 2018. Lexi, her classmates and other parents all enjoyed advocating for different issues and specific bills that will affect aspects of their everyday lives and rights as Tennesseans.