A Vision Brought to Life 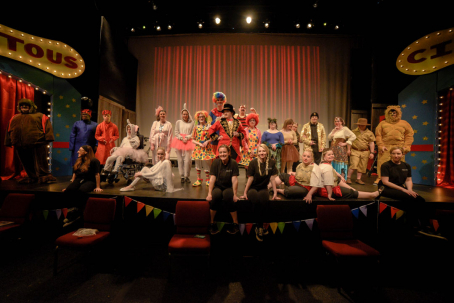 Before Melissa Smith opened Backlight Productions, a theater program for adults with special needs, she spent her time managing employees at Our Thrift Store in Franklin, Tennessee. This thrift store was designed to employ people with disabilities. Before long, Melissa considered opening a musical theater to give adults opportunities to shine on stage.

Coming from a background in musical theater, the idea seemed to be a perfect blend of Melissa’s talents. The vision flourished into a first performance in 2011 of Cinderella. The thrift store lent props to the performers as they acted for fun in a church youth room. It didn’t take long for Melissa to figure out that she had tapped into something big. Backlight Productions was born. Each year following the first performance, the program grew more and more.

Today, professional actors and actresses perform alongside the students as equals in full-length, mainstream Broadway productions. Backlight Productions also carries out a “Backlight On-Tour” program, where the students give performances, as well as put on workshops for local schools.

“It’s like Special Olympics for theater. I’m so excited that we’re able to create this amazing experience for the adults with disabilities who come through Backlight Productions,” said Melissa.

Eventually, Melissa would like to see Backlight Productions grow even more and implement similar programs in other areas of the United States, allowing more people to be a part of the vision.

“This grant is the largest we’ve ever received. Because of this financial support, we were able to purchase video cameras to record performances, a new computer for editing these videos, and microphones so that our students can be heard loud and clear by the audience. In this way, we’re able to give performers a voice.”

The microphones have been used in a play about kindness and inclusion, and Backlight Productions has also used the microphones for workshops that were combined with the shows. Through all these new resources, spreading the word about the program has never been easier.

“It’s important to know that we’re inclusive of all disabilities. We get to know each actor and meet them where they are at.”

Melissa has seen many benefits of the program come to fruition through increased confidence in speaking skills and the consistency of training, performing, and community the students receive from the program. Backlight Productions is currently trying to partner with other organizations who also serve people with disabilities to expand their reach.

Follow Backlight Productions as they carry out their mission of providing opportunities for adults with special needs to gain education in the arts and perform significant roles before live audiences: https://backlightproductions.org/

For more information about our small grant program and how you can apply, visit www.tndisability.org/small-grants-overview