The Effects of a Brain Injury 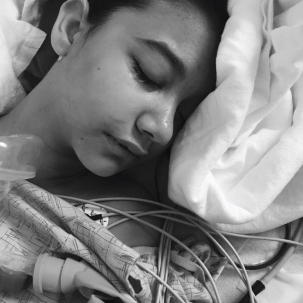 Yasmeene fell in a school gym one afternoon. Upon waking, she seemed disoriented and began experiencing radiating pain in her head. Christen, Yasmeen’s mother, arrived to pick her up.

“Soon after returning home, Yasmeene started throwing up, so I rushed her to the hospital,” she said.

Christen and her daughter waited as the doctors debated giving her a CT scan. Their consensus was that the decision for a scan rested on Christen.

“I just knew in my gut she had to have a scan. Fourty-five minutes later, the doctors told me Yasmeene had a brain bleed, so we were transported to the local children’s hospital.”

Although Yasmeene did not sustain a skull fracture in the back of her head from her fall, the bleed culminated in the front right side of her brain. The doctor assured Christen that the bleed was a result of the fall, and did not need any follow-up scans before leaving the hospital for another six weeks. However, Christen again felt uneasy about his call and decided to get a second opinion.

The family’s primary care doctor arrived at the hospital and agreed that Yasmeene needed further testing.

“Our first visit was one of the hardest days of my life. Just hearing the possibilities that she could have an underlying condition terrified me. We had to wait until the blood on her brain cleared up to see if one of these conditions was affecting her.”

Christen and Yasmeene returned to the hospital numerous times over the course of a year before discovering that Yasmeene had cerebral cavernous malformation (CCM), a rare brain disease. The disease makes the vessels in the brain malformed, filling with slow-moving or stagnant blood as blood flow is altered.

“I’m glad that my Mom instinct kicked in after Yasmeene’s fall.”

Before her TBI, she struggled with school, but after her injury, that struggle increased. Since the injury occurred in the right front part of her brain, her focus, memory and aptitude for learning are impacted. Yasmeene spends hours reading school material, but can only remember a small portion of it. The lights also affect her and trigger migraines. Shortly after returning to her old school, Yasmeene withdrew so that she could engage in homeschooling.

“Most of us don’t know how the brain functions or how severe a brain injury can be until a TBI happens,” said Christen.

Since making adjustments and accommodations to daily life so that Yasmeene can learn how to navigate through her TBI, Christen has learned a few things along the way.

“You are not alone. Go to a local support group and share your story; you will meet other parents who have experienced similar journeys.”

Christen reached out to Project BRAIN for help supporting her daughter at school. Project BRAIN is the only program in the state focused on providing training for school staff and health professionals on how to best support students with traumatic brain injury.