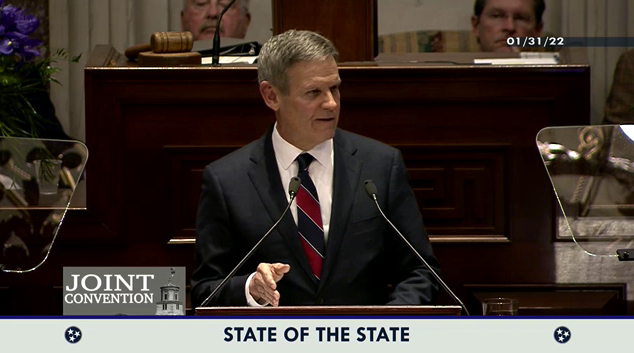 Governor Bill Lee gave the final Tennessee State of the State Address of his first term on Monday evening. Lee’s theme, “America at its Best,” celebrated 225 years of Tennessee statehood and marked a decidedly different tone than his 2021 address. With a budget surplus of $4 billion, about $60 billion in federal relief funds and a swelling rainy-day account, Governor Lee announced several big investments in the state.

One of the Governor’s largest and most impactful investments is the proposed $1 billion in additional recurring funds for public education. The state ranked 44th in per-pupil spending in 2021, and while an additional $1 billion per year does not quite bring the state’s spending up to the national average, it’s a sound and important investment.

The Lee administration and the Tennessee Department of Education have been engaged in a month’s long stakeholder engagement effort, which has produced a draft framework of a new public education funding system. Lee described a “money-follows-the-student” model, which is most commonly referred to as a “weighted” funding formula, to replace the 30-year old Basic Education Plan (BEP).

The state’s effort to reform the BEP is welcome, necessary and long overdue. A proposed weighted funding formula, which better accounts for the unique needs of students, particularly those with disabilities, is promising. While the general framework has been announced, it’s important to continue to monitor the details of the proposal and to advocate for the best policies for students with disabilities.

Governor Lee also described several proposed investments in improving health care in Tennessee. First, he proposed $25.5 million to fund an adult dental benefit for TennCare eligible Tennesseans. Dental health is often indicative of overall health, and in recognizing this fact and addressing the issue, Governor Lee will help to improve the health of hundreds of thousands of Tennesseans who did not previously have access to dental care.

The Governor also proposed $18.6 million to recruit and retain health care professionals, with a focus on rural Tennessee. The state has had the 2nd most rural hospital closures since in the US since 2005, and access to general physicians and specialists is especially difficult for rural Tennesseans. Inadequate health care networks affect Tennesseans with disabilities the most, leading to a lack of care, long commutes to receive care and the inability to address specific needs. If the investment is effective, Tennesseans with disabilities may be have more reliable access to primary care, greater access to specialists and may save money on long commutes and stays to see far-away providers. The Governor also demonstrated a continued focus on addiction treatment and recovery by proposing $7 million to these programs.

Among the biggest investments proposed by the Governor are funds to support long-term supports and services (LTSS) and the state’s waiver programs. While he did not focus much of speech on the issue, his budget highlights several expenditures including:

These are all incredibly important investments that are, frankly, overdue. Waiver programs in the state are plagued by inadequate provider networks, a workforce shortage and long waiting lists for services. These investments can go a long way toward improving access to these vital services.

The Governor’s proposed budget also includes funds to add 1,250 individuals on the ECF CHOICES waiting list to the “Pathways to Independence Program” that would provide limited home-and community-based services such as “enabling technology” and employment assistance. While enabling technology may work for some, it certainly does not work for everybody, and definitely cannot replace in-person care for some individuals. That said, these individuals are on a waiting list and receiving no services, so even insufficient or poorly matched services can be better than nothing.

With money in the coffers to spend, Governor Lee promised that his policy priorities and budget would be “bold.” Indeed, Lee proposes to make several investments that touch the lives of Tennesseans with disabilities. Investments in education, health care, infrastructure and vital services for Tennesseans have the potential to be impactful for individuals with disabilities and their families in the state. As we watch these proposals move through the General Assembly session and be implemented, it remains important that our voices be heard and that these funds are put to their best use.